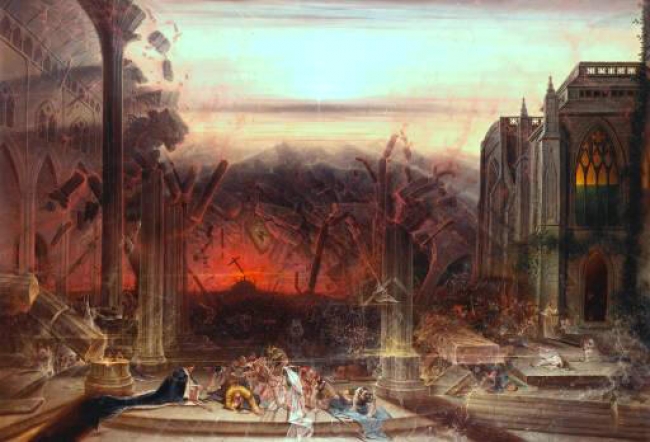 This nicely portrays the fall of all religions that focus upon stone buildings rather than the heart of God and Man in Jesus
Christ.  "God is Spirit, and those who worship Him must worship Him in Spirit and in truth"

Like John Martin, Colman specialised in apocalyptic paintings. Colman was a Nonconformist: a Protestant who opposed the Established Church, in this case the Church of England. Not surprisingly, this painting shows the embodiment of state-run religion – a Gothic cathedral – being destroyed, with its inhabitants cowering in terror. Resurrected spirits rise from the ground and assemble in the sky above. The cathedral’s stone cross, representing established religion, crashes to the ground, silhouetted by a blood-red horizon. Meanwhile the true cross, the symbol of Christ’s sacrifice and of eternal life and here representing pure faith, appears in the brilliant celestial light.
(From the display caption September 2004)