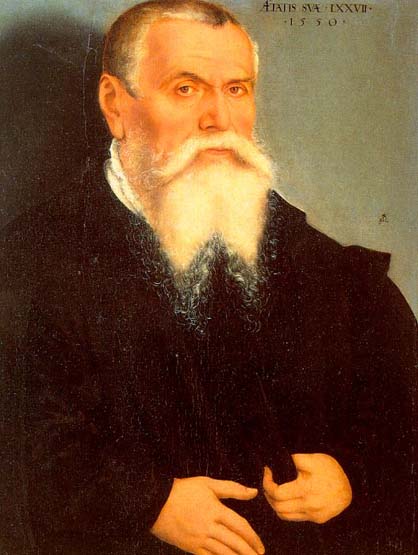 The Reformation not only took full advantage of the invention of the printing press but the Reformation also had it's own graphic artist to help capture the moments & personalities of that important era in church history -- Lucas Cranach (a.k.a. Lucas Cranach the Elder to distinguish him from his also artistically successful son of the same name) -- Cranach did not merely paint pictures but was closely involved in the Reformation as he was even a "witness" at Martin Luther's wedding & was "godfather" to the Luther's first born child.

Cranach's art was dramatically affected by the Reformation as we can see before 1517 (the year Luther nailed the 95 Theses to the Church door in Wittenberg) he mainly painted depictions of the Virgin Mary & other such traditionally Roman Catholic themes. But after 1517 the object of his art was to capture salvation themes, such as sin & grace, Adam & Eve & Gospel accounts. Cranach also has provided & preserved for us many profiles of the Reformers including portraits of Luther, Luther's parents, & Katie von Bora, Luther's wife.

So between the remarkable providential timing of the Reformation at the invention of the printing press, add to that Lucas Cranach's abilities to capture the important tone & personalities of that time.